I am so proud to be part of this movement..Diane Dougherty  Stay tuned for my ordination in Atlanta.  Hopefully in October, 2012.  I would like it to be October 20 or 27th.     I will give all updates so you can attend.  All are welcome. 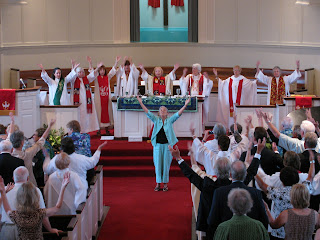 A new spiritual uprising is rocking the Catholic Church today.
At the Vatican we see the “Monsignors Mutiny”a tale of betrayal, corruption and power struggles that has the potential of becoming a blockbuster movie that could rival the Da Vinci Code. One Italian paper even suggested that an unnamed laywoman had secretly ordered the butler to leak the secret documents which is referred to as the Vati-leaks. But the Vatican, of course, denies it all...” http://www.thedailybeast.com/articles/2012/05/30/the-pope-s-butler-silenced-in-vatileaks-investigation.html
In May 2012, hundreds of Irish priests called for an end to mandatory celibacy and for women’s ordination in an unprecedented challenge to the Vatican. http://www.cathnews.com/article.aspx?aeid=31216 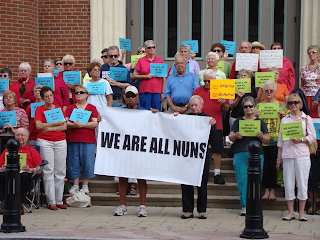 Like the woman in Luke’s Gospel whom Jesus declared free after being bent over for eighteen years, the Spirit is a movin’ in the courageous nuns. In response to the Vatican’s rebuke of the Leadership Conference of Women Religious for their support of women’s ordination, homosexuality and contraception, the Sisters are planning a bus trip to nine states to showcase their ministry to the poor and disenfranchised. 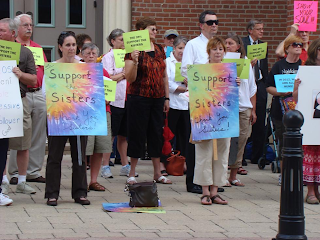 Thousands of Catholics have attended prayer vigils and signed petitions in solidarity with the Sisters in the Nun Justice Project. One day, I hope we will have nun priests! http://www.nytimes.com/2012/06/06/us/us-nuns-bus-tour-to-spotlight-social-issues.html?_r=2&emc=eta1

The Spirit is a movin’ in the women priests movement as we live Gospel equality now and ordain women like Donna Rougeux.

Donna will be ordained a Roman Catholic Woman Priest in the second ordination of a woman priest in Lexington, Kentucky in the Unitarian Universalist Sanctuary. Together with Janice Sevre-Duszynska, the first woman ordained here four years ago, Donna is standing up in solidarity with all who are oppressed and marginalized for justice. As a woman priest, she is leading, not leaving the Catholic Church into a new era of inclusivity, partnership, equality and openness where all are welcome to receive sacraments. Everyone belongs at the Banquet Table of God’s boundless, abundant love. As the Irish writer, James Joyce, reminded us in Finnegan’s Wake, being Catholic means “here comes everybody.” 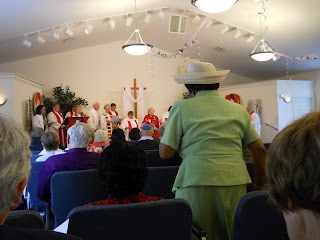 In Luke 13:10-13, when the synagogue leader expressed outrage that Jesus had healed on the Sabbath, Jesus called the religious leaders, hypocrites and pointed out that this healing was for a daughter of Abraham and Sarah, who had suffered for 18 years. So, there are several take home messages here: 1) Jesus treated women as equals. 2) People have priority over rules and regulations. 3) Sexism is sinful and should always be challenged. 4) Our Compassionate God lifts up all who are bent over by the burden of patriarchy.
The good news is that the Spirit of God is renewing the church in a spiritual uprising in vibrant, grassroots communities

where the liturgical presiders include women priests, married priests, celibate priests and other leaders. 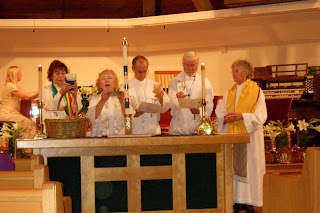 Amazing Grace is at work in our midst! Three examples are here in Lexington, the newly named Resurrection Community in Cincinnati and the Community of St. Peter in Cleveland. I predict that in the next several years, hundreds of empowered ecclesial communities will rise up for justice and live the change they have dreamed of in our church! 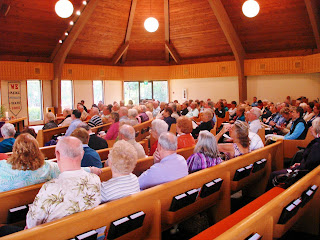 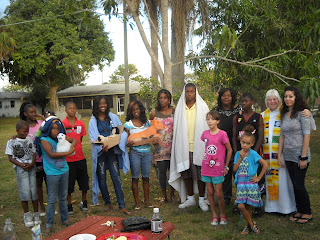 We are living witnesses to the transformation, that one day will be affirmed in Vatican III, a Council of the People of God. Joel describes this passionate, outpouring of divine love on humankind in these words: “Your daughters and sons will prophesy, your elders will have prophetic dreams and your young people will see visions. I will pour out my Spirit even on those in servitude, women and men alike.” (Joel 3:1)

The institutional church is trying to keep women bent over when it refuses to recognize their call to the priesthood. No longer will we tolerate the Vatican’s practice of sexism, which is rooted in the misogynist attitude of church fathers like Tertullian who once said that women are the “gateway to the devil” and Thomas Aquinas who defined woman as a “defective male.”
In a modern day inquisition, the Girl Scouts are facing an official inquiry by the United States Conference of Catholic Bishops. The problem is their association with groups like Doctors Without Borders, Oxfam, and the Sierra Club because these organizations support contraception and family. We challenge the bishops for their unjust attack and stand in solidarity with the Girl Scouts for their program of empowerment of girls. Let us feast on Girl Scout Cookies often! 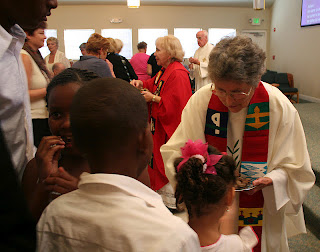 If women priests were decision-makers in our church, women’s health care including contraception and universal health coverage would be major justice issues. We believe women have the divinely human right to make reproductive decisions on their own behalf --without consulting male priests or bishops. 98% of sexually-active Catholic women have used a method of contraception banned by the U.S. bishops.
A spiritual uprising in theology is evident today in the thinking of brilliant theologians like Elisabeth Johnson, author of Quest for the Living God Mapping Frontiers in the Theology of God, and Sr. Margaret Farley, author of Just love, A Framework for Christian Sexual Ethics. Both books have been denounced by the hierarchy. After the pope censured Farley’s book, which is a contemporary ethical approach to same-sex relationships, masturbation, remarriage after divorce, it soared from obscurity to the top of Amazon.com’s best-seller list - six years after it was published. In her book, Sr. Farley argues that same-sex marriage “can also be important in transforming the hatred, rejection, and stigmatization of gays and lesbians.” She wrote that “same-sex relationships and activities can be justified according to the same sexual ethic as heterosexual relationships and activities.” http://www.nytimes.com/2012/06/05/us/sister-margaret-farley-denounced-by-vatican.html 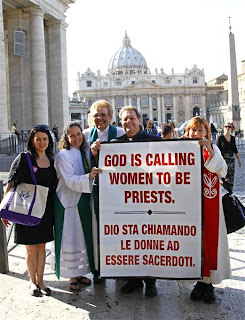 Women are silent and invisible and subordinate no more! We are speaking truth to power and the ministry of irritation is our forte! 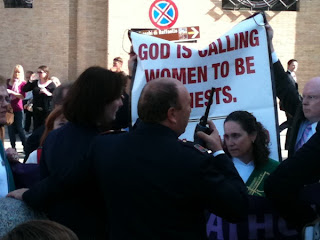 Roman Catholic Women Priests Janice and Ree Hudson and Deacon Donna went to Rome last October to support Fr. Roy Bourgeois who four years ago stood here to witness for justice at Janice’s ordination. As you remember that resulted in big trouble for Roy, which has played out like an ecclesiastical soap opera! 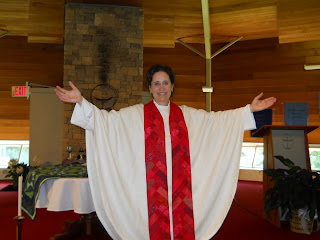 My favorite scene is the one where the Roman police are instructed NOT to arrest the women priests dressed in liturgical attire. The Italian police blocked Janice, Ree and Donna from entering the Vatican, but they did not haul them off to the police station like Fr. Roy and Erin Hanna of the Women’s Ordination Conference. Once again, as the world press recorded every minute of the drama, I was reminded that the Vatican is the gift that keeps on giving! Fr. Roy has recently published his story in a booklet entitled: “My Journey from Silence to Solidarity” which can be read online www.roybourgeoisjourney.org ( for copies call:706-682-5369)
In her own words, Donna shared this inspiring testimony explaining why she chose today’s reading for her ordination. “I am like the woman in the story who after Jesus laid his hand upon me, ‘stood up straight and began thanking God…’”
“In Ephesians (3:17-21) we read: ‘I pray that God, out of the riches of divine glory, will strengthen you inwardly with power through the working of the Spirit.’ I believe this is what happened to the bent over woman and to me. We were strengthened inwardly. I also think that until this happens we are unable to ‘grasp fully the breadth, length, height and depth of Christ's love.’ Christ's love is not just about putting on an 'all is well attitude'...It also involves working for justice and not just trying to please everyone to keep the peace. When we stand up and work to bring about the kin-dom, we don't make everyone happy. We even encounter excommunication and disdain from some. Standing up with inward strength means we have to rock the boat and that makes some people very unhappy. But it also brings us in a place where we can grasp more fully the breadth, length, height and depth of Christ's love.’”Amen, Donna, to rocking the boat of Peter and walking on water with Christ! I guarantee that you are in for quite a spiritual adventure!
I believe that on a deep spiritual, mystical level women women priests are beginning a healing process of centuries-old deep misogyny in which spiritual power was invested exclusively in men. For some like the Catholic hierarchy, women priests are a spiritual uprising. For millions of people the time has come for a holy shakeup that will bring new life, creativity and justice to the church and beyond.
The New Testament identifies the crucified Christ with the Wisdom of God. “…to those who are called, Christ is the power and the wisdom of God.” (1 Cor. 24 The connection in scripture is made between the crucified Jesus of Nazareth and the cosmic Risen Christ in Christ-Sophia. In this liturgy today we integrate this powerful image of Christ- Sophia in our prayer and song. Thanks to our music director, Kathleen Rosenberg, for the beautiful musical Mass of Christ-Sophia which she composed.
Now we ordain our beloved sister, Donna, who like the woman whom Jesus set free in the Gospel, will share God’s healing compassion with all those she encounters in her ministry. Like the woman who was healed in the Gospel, we, too, are set free to work for justice and to live Gospel equality now!


Bridget Mary Meehan, D.Min., a Sister for Christian Community, was ordained a Roman Catholic priest in Pittsburgh, Pennsylvania on July 31, 2006. She was ordained a bishop on April 19, 2009. Dr. Meehan is currently Dean of the Doctor of Ministry Program for Global Ministries University, and is the author of 20 books, including Living Gospel Equality Now: Loving in the Heart of God, The Healing Power of Prayer and Praying with Women of the Bible . She presides at liturgies in Mary, Mother of Jesus Inclusive Catholic Community in Sarasota, Florida and celebrates liturgies with groups in N.VA. Dr. Meehan can be reached at sofiabmm@aol.com and www.arcwp.org

Posted by Bridget Mary at 8:47 PM
Posted by Diane Dougherty at 4:55 PM