Bishop Bridget Mary Meehan Ordination Homily: Oct. 20, 2012/Atlanta
This is the day God has made, let us rejoice and be glad in it. Today we are making
history in Atlanta because the Association of Roman Catholic Women
Priests is ordaining six women.


Diane Dougherty will be ordained a priest.(center with red stole)
Barbara Duff, (left, bottom row)
Debra Meyers, (second row, right)
Joleane Presley,(bottom row, right)
Irene Scaramazza, (center, back row)
and Rosemarie Smead (left second row)
will be ordained deacons.
These six courageous women stand on the margins with us to serve God’s people in an inclusive Catholic Church where all are welcome to receive sacraments.


As we gather around Holy Wisdom’s Banquet Table to feast on the Bread of Life and to savor the Wine of Abundant Love, we are blessed to be in this sacred space, the First Metropolitan Community Church.


Like Deacon Phoebe, an influential leader in the early church, and St. Mary of Magdala, the apostle to the apostles, and apostle Junia, a co-worker and partner with Paul in preaching the Gospel, these women have been called by the Risen Christ to “go and tell” the good news of Gospel equality. For some, like the hierarchy, women priests are a revolution, for millions of Catholics, we are a holy shakeup whose time has come.


The Catholic Church should follow the example of Jesus who called both men and women as disciples and treated them as equals and partners in the Gospel.In Luke 8:1-3, we learn that among his disciples were: Mary of Magdala, Joanna, Suzanna, and many more who supported Jesus with their own funds. How many sermons have you heard about the women who bankrolled Jesus’ministry.


Now, however, change is in the air and all over the airwaves!


On Sept. 18th at the International Congress of Coptic Studies, Professor Karen King, a historian at Harvard Divinity School , reported that a fourth century datedpapyrusrefers to Jesus’ wife and states that “she will be able to be my disciple.” (Laurie Goodstein, “A Faded Piece of Papyrus Refers to Jesus’s Wife, “New York Times, September 18, 2012)


According to all four Gospels, Mary of Magdala is the only person described as present at both the cross and the tomb. The Gospel of John portrays a close relationship between Mary of Magdala and Jesus. When the other disciples come and go, Mary stays nearby, weeping. In an age where a woman’s word was suspect, the Risen Christ appears first to Mary, not Peter, and calls her to be the apostle to the apostles to proclaim the good news of the Resurrection, the central belief of Christianity. Like Mary, women today, are being called to preach the good news that Christ is risen and continues to rise up in God’s people for justice, liberation, and new life! We are silent and subordinate no more!


In an ancient Coptic Christian Scripture, “Pistis Sophia”, written in the Second Century, Jesus chooses Mary of Magdala and John to “be on my right and on my left.” Mary’s prominence is reflected throughout the document. She asks 39 out of 46 questions and participates in providing interpretation of this document. Peter expresses resentment toward her throughout the work: “My Lord we shall not be able to endure this woman, for she takes our opportunity and she has not let any of us speak and takes all the time herself.” Mary objects to Peter’s efforts to intimidate her and charges that “he hates the female race.”


In Romans 16, St. Paul acknowledges Deacon Phoebe’s leadership in the early Christian movement. Phoebe was entrusted with the mission to proclaim Paul’s letter to the house churches in Rome. She was an influential leader whose authority and credentials were accepted by the local church. Contemporary scholars like Dr. Elizabeth Schussler Fiorenza believe that women leaders like Phoebe were not assistants to the apostles, but rather were apostles, missionaries, and leaders of communities equal to and independent of Paul. Elizabeth Schussler Fiorenza, In Memory of Her , p. 179, 48. )


In Romans 16:7 St. Paul commended Junia and Andronicus, as “outstanding apostles” who were in Christ before he was. It is the only time that Paul refers to someone other than the Twelve or himself as apostles. Some biblical translators changed Junia, a female name, to the male name Junias, and up until recent years the male name appeared in most bibles. Patristic sources, including St. John Chrsysostom and St. Jerome acknowledged Junia as an apostle.


Somehow, I think Junia might be missing from the contemporary curriculum in Catholic Schools and seminaries. It is time for a revision!


Since Paul, Junia and Andronicus were apostles, there were more than 12 apostles. The “twelve” was a symbolic number referring to the twelve tribes of Israel. And, of course, in spite of what the hierarchy in the Roman Catholic Church states, Jesus did not ordain anyone at the last supper.


Scholars, like Gary Macy, in The Hidden History of Women's Ordination , present scholarly evidence of women in Holy Orders during the first twelve hundred years of the church's history. (One could say that is the church's best kept secret, but NO MORE!!)


Our liberation movement is living prophetic obedience to the Spirit by disobeying an unjust, man-made, canon law that discriminates against women in our church. Sexism, like racism, is a sin. Women in the Roman Catholic Church are treated like second class citizens. The Catholic Church cannot continue to discriminate against women and blame God for it. Like Rosa Parks, whose refusal to sit in the back of the bus helped to ignite the civil rights movement, the Association of Roman Catholic Women Priests is not leaving the church, but leading the church into a new era of gender justice.


As part of an international initiative of the Roman Catholic Women Priests Movement, the Association of Roman Catholic Women Priests claims equality as a human right.Our vision is justice for all, justice for the poor, justice for women, and justice for women in the church including ordination. We speak out for women’s rights and non-violence. We speak truth to power and the ministry of irritation is our forte! The Association of Roman Catholic Women Priests challenges church teachings that negate women’s experiences such as contraception. We support marriage equality and nunjustice for women religious in the recent Vatican take -over of their organization, the Leadership Conference of Women Religious. We foster ecumenism and interfaith relations. We stand in solidarity with our sisters and brothers from all faiths and no faith who work for justice for all who are oppressed and marginalized in our world.
Now we ordain our beloved Sisters, Diane, Barbara, Debra, Joleane, Irene and Rosemarie. Wouldn’t Deacon Phoebe and apostles Mary of Magdala and Junia be proud of them? … and of us?!! Alleluia


Bridget Mary Meehan, D.Min., a Sister for Christian Community, was ordained a Roman Catholic priest in Pittsburgh, Pennsylvania on July 31, 2006. She was ordained a bishop on April 19, 2009. Dr. Meehan is currently Dean of the Doctor of Ministry Program for Global Ministries University, and is the author of 20 books, including Living Gospel Equality Now: Loving in the Heart of God, The Healing Power of Prayer and Praying with Women of the Bible. She presides at liturgies in Mary, Mother of Jesus Inclusive Catholic Community in Sarasota, Florida and celebrates liturgies with groups in N.VA. Dr. Meehan can be reached at sofiabmm@aol.com and www.arcwp.org
Posted by Bridget Mary Meehan at 9:00 PM No comments: 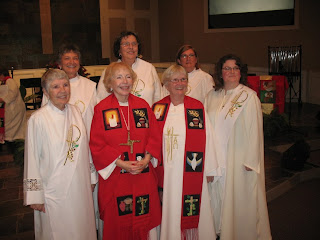 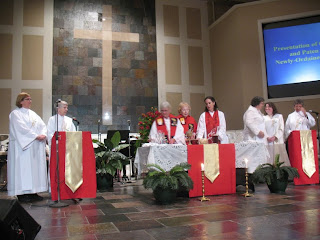 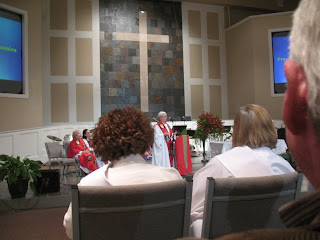 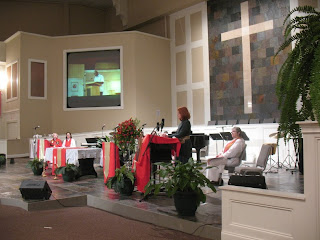 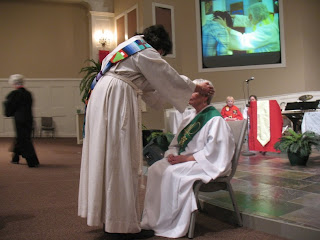 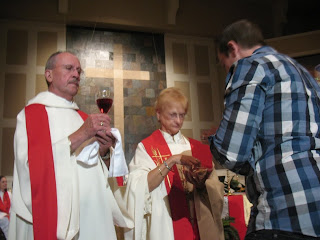 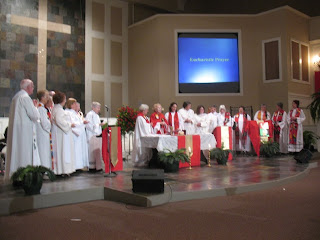 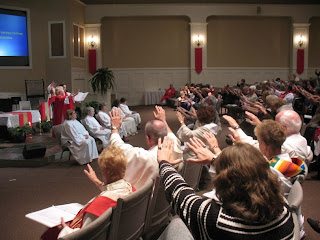 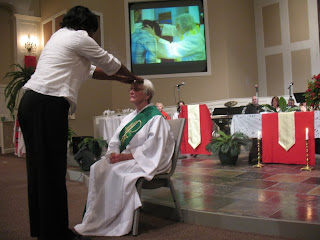 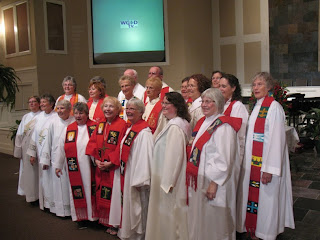 Thank you Bridget Mary, for your sermon and photos from Bob's pictures....If someone wants to walk me through how to do this myself-I welcome the teaching....dd

It is very sad that people like you try to confused people minds, obviously you are NOT a Roman Catholic Priest. The Catholic's only believe what our dearest father our Pope BenedictVI say. God Bless you and may God forgive you!