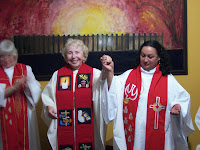 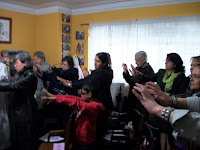 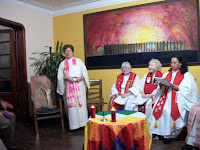 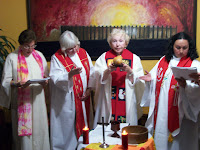 From left to right:
Olga Alvarado,Judy Lee, Bridget Mary, Marta Soto
On March 20, 2011 Marta Soto was ordained by Bishop Bridget Mary Meehan. This historic ordination took place in an ecumenical center for justice and peace in a poor neighborhood where property was protected by high fences. When we entered the small rooms with old classroom chairs and wooden tables, it appeared to be a place like any other. We greeted the people assembled and formed a procession where neighborhood leaders, nuns, children, a Roman Catholic priest and a Presbyterian pastor joined us. Those gathered welcomed us with warmth, enthusiasm, and joyful anticipation of the history to be made.
Then the director of the center, a priest, stepped forward to greet us and explain the artifacts in the room. The chairs labeled with the names of people who became martyrs. The large painting behind our makeshift altar, covered with a cloth made by indigenous people, revealed haunting faces of “los desaparecidos,” the many women and men who were taken during a time of holocaust in “war zones” as farmers protected their land. The priest showed us a large rock that was used to murder those who resisted oppression and those who stood with them. Many nuns, priests, missionaries, and lay ministers were among them. He showed relics and shared stories of the modern day martyrs and saints. Silence and emotion encircled us as we realized that we were encompassed by a large cloud of witnesses who continue to support equality and justice for all.
We were reminded of the statement from the Conference of Latin American Bishops held in Medellin, Colombia in 1968 that justice is a constitutive dimension of the Gospel: “The Christian quest for justice is a demand arising from biblical teaching…We have faith that our love for Christ and our brothers and sisters will not only be the great force liberating us from injustice and oppression, but also the inspiration for social justice, understood as a whole of life and as an impulse toward the integral growth of our countries."
http://personal.stthomas.edu/gwschlabach/docs/medellin.htm
The Association of Roman Catholic Women Priests affirm this prophetic vision and dedicate our lives of service to justice for all, justice for the poor, justice for women including women in the Roman Catholic Church, which mandates the ordination of women in a renewed priestly ministry united with the people we serve.
Judy Lee, RCWP, program coordinator for Latin America, moved to tears, responded in Spanish that we were deeply grateful to share this holy space, and we join them in solidarity on this sacred ground. We will include these saints in our Litany of Saints in our ordinations. The priest responded that the issue of women in the church is a prime example of injustice, and expressed solidarity with women who are called to be priests. He needed to return his work and was not able to stay for the ordination. Another priest was with us. He is a prominent theologian and educator who in fact, taught theology to our ordinand and other women present. He assisted us throughout the ceremony.
Here, embraced by those who suffered and gave everything we stepped forward to ordain the second South American woman priest. The first, Olga Alvarado, was ordained in December in Sarasota, Florida.
Before the Liturgy of the Word, Olga presented the reasons Marta should be ordained, all present nodded in assent and affirmation. Marta was surrounded by two of her adult children and many friends and supporters.
After an impassioned homily delivered by Bridget Mary and translated by Olga, people were emotional, responding with tears and applause as Marta Soto was ordained. All present came forward to bless her with the laying on of hands.

During the time of giving thanks for supporters, a pastor of a local Christian Church stepped forward, welcomed Marta into the ecumenical community, and strongly affirmed support for our women priests. Marta ended the time of giving thanks with a poem she wrote that speaks of realizing the dream of equality and justice through active resistance.
After the final blessing given by Bridget Mary and Marta, all embraced, dancing with one another in compassion and solidarity.
Later in the evening, we met with five applicants and their supporters. We were excited and moved to learn how their justice and compassion oriented ministries are in solidarity with the poor and outcast. We also noted that the theological preparation of these women was, in fact, outstanding. The local Catholic University is progressive as and there are many other learning opportunities.
It was stated that a local archbishop answered a young woman’s question regarding ordination by saying that the ground is prepared and the acceptance of women’s ordination to the priesthood may take ten years but it will come in the young woman’s lifetime!
The harvest is ready and the women are stepping forward as Roman Catholic Women Priests!
Judy Lee, RCWP
judyabl@embarqmail.com
Bridget Mary Meehan, RCWP
sofiabmm@aol.com
www.associationofromancatholicwomenpriests.org
Posted by Diane Dougherty at 8:15 PM