Pink Smoke Over the Vatican-Interview

This interview with Jules Hart is spectacular.  It will be worth the 20 min. you take to watch it.  Please consider joining an initiative to bring this film to a theater in Atlanta.
Posted by Diane Dougherty at 4:56 PM No comments: 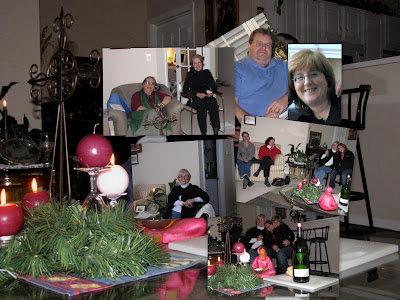 In preparation for ordination, prayer services will be held at my house.  In December we celebrated these early beginnings with an Agape Meal. Although there is only one direct reference in scripture to the early Christian Agape Meal or "Love Feast" (Jude: 12), we know from I Corinthians that the Lord's Supper was celebrated in the early church in connection with a common meal, using the bread and cup already on the table to "re-member" or re-constitute the Body of the Risen One.

Posted by Diane Dougherty at 9:58 AM No comments:

A diverse community of supporters, including the poor and marginalized from Good Shepherd Community in Ft. Myers, Florida, celebrated the historic ordination of the first Roman Catholic Woman Priest from Latin America.
Association of Roman Catholic Women Priests
www.associationofromancatholicwomenpriests.org
Posted by Diane Dougherty at 5:49 AM No comments:

The Refusal of a Room

I love this article because it has given birth to a new, thoughtful and exciting word-one that demonstrates for me many of the underlying issues denying the gospel to multitudes of people.  The word-full participation in "Churchanity" rather than Christianity.  All issues are focused as a simple room rental is denied.
http://www.newcatholictimes.com/index.php?module=articles&func=display&ptid=1&aid=2198
Posted by Diane Dougherty at 5:41 AM No comments:

Email ThisBlogThis!Share to TwitterShare to FacebookShare to Pinterest
Labels: Article

and justice for all.
2. We serve the poor and marginalized.
3. We live the spiritual and social justice tradition of the church

in inclusive communities of equals.
Posted by Diane Dougherty at 11:23 AM No comments: