For all of the readers, I would like you to know the head of the Maryknoll community, Edward Dougherty, is no relation (that I am aware of) and I find his actions shameful. The entire scenario is an act of bullying that threatens the psychological health of our entire Catholic Community.
In talking of these possible consequences last December, Fr. Ray said he would just as soon walk to a soup kitchen with a clean conscience as bend to his unjust dictate. Good for you Fr. Ray.
He has been in community and served as a priest for 40 years. If the community follows through with their threats, he may well be left with little more than the minimal amount his social security brings.
He is making a bold move in pursuing hierarchical disobedience. And I will follow suit by being ordained on April 2.....I have never been so proud in my life!

Don't be a bysander! You can act on his behalf by:
Signing a petition
http://www.womensordination.org/index.php?option=com_chronocontact&chronoformname=form
call or write....
email
mklcouncil@maryknoll.org 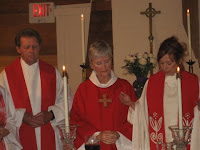 Congratulations Fr. Roy Bourgeois! You are a prophet.
You crossed the VATICAN LINE. Your support of women priests have angered the bullies in the Vatican. Now they are demanding that you recant or you will be thrown out of the Maryknoll Order. Your are in big trouble for your courageous witness to Gospel equality in the Catholic Church! Just like the prophets of old! Thank you!

Shame! Shame on the Maryknoll Priests General; Edward Dougherty for giving in to such oppressive tactics. Is this how Jesus would behave? This kind of response manifests a domineering consciousness and not the Christ consciousness to which Jesus calls us. More than any order, the Maryknolls are aware of the connection between "might makes right" and the suffering of women, children, and all marginalized peoples.

Instead of standing up to the Vatican and shining their light by supporting Fr. Roy, and women priests, the Maryknolls are retrenching into medieval darkness by supporting the Vatican's abuse of power. Now is the time for Catholics to put their money where their hearts are and support the grassroots communities that foster justice and equality.
The Vatican and Maryknoll are on the wrong side of history again. Women worldwide are rising up for religious equality. Roman Catholic Women Priests have reclaimed our ancient heritage of leadership in the early Christian community. Women Priests are visible reminders that women are equal images of God, and are therefore worthy to celebrate the sacraments and interpret the Gospel from their lived experiences.

Our Spirited movement is growing in Canada, U.S. Europe and in Latin America. Now more priests , bishops nuns, and theologians are expressing their support and solidarity with the Roman Catholic Women Priests Movement. We owe a debt thanks to Fr. Roy Bourgeois for being a courageous witness to the words of Jesus who called women and men to be disciples and equals. For the Catholic hierarchy, women priests are a revolution, for Fr. Roy and millions of people, the time has come for this holy shakeup!

Maryknoll Fathers and Brothers • Catholic Foreign Mission Society of America, Inc. PO Box 305 • Maryknoll, New York 10545-0305 Phone: (914) 941-7590 Rev. Roy L. Bourgeois, M.M. P.O. Box 3330 Columbus, GA 31903
First Canonical Warning
Dear Father Bourgeois,
Since the September 27, 2006 letter from the Congregation for the Doctrine of the Faith was received we have been in communication with you via letter, and at least two meetings where you were ordered to recant your public views on the ordination of women priests and clearly told not to participate in their meetings and public events. You were Excommunicated Latae Senteniae reserved to the Apostolic See because after a canonical warning by the Society in 2008 you failed to recant within the stated 30 days from contumacy and disregard for the Magisterium of the Church on the matter of women's ordination (ct. 1347 CIC). . According to our documentation, you continued to speak publicly in favor of women's ordination in disobedience to the explicit instructions of your Superiors and recently participated (Feb. 12, 2011) in a panel of speakers following the showing of the film "Pink Smoke over the Vatican" at Barnard College in New York City. Sufficient time has now passed for you to consider the gravity of the matter. You are hereby asked one final time by the Superior General and his Council to publicly recant and accept the teaching of the Church on this serious matter concerning priestly ordination and the explicit teaching of the Church. : Having heard the advice of my Council, the Maryknoll Bishops' Advisory Board, and consultations with the Holy See, I now hereby declare that you will be dismissed from the Catholic Foreign Mission Society of America Maryknoll Fathers and Brothers) unless you publicly recant your views on the ordination of women and agree to obey your legitimate Superiors. If you fail to comply within fifteen (15) days of receipt of this first canonical warning, I will issue a second canonical warning. If you fail to respond to the second canonical warning, I will proceed with dismissal by submitting evidence of your contumacy as a priest who publically rejects the teaching of the Holy Father (C. 1371), also a priest who acted illegitimately in “communicatio in sacris” –such as participation in an invalid ordination ceremony of a woman (C. 1384). “Concelebrating” Mass with women analogous to simulation of the Eucharist (C. 1379), giving scandal to the Christian faithful in a serious matter over a two-year period (C. 1399) and Disobedience to the instructions and warnings of your legitimate Superiors and the Apostolic See (C. 601; MK Const. 40). The dismissal will be submitted to the Congregation for the Doctrine of the Faith for confirmation with a request for laicization. \. The Reasons for the Dismissal: In Accordance with Canon 696.1
1. For obstinate disobedience of your legitimate Superiors in violation of Canon Law and your Oath to the Society and the Magisterium of the Church in a grave matter.
2. Grave scandal given to the people of God, the Church, especially in the United States, and many of the Maryknoll Priests and Brothers.

3. Diffusion of teachings opposed to the definitive teaching of John Paul II and the Magisterium of the Church. (Cf. C. 1024; Ordinatio Sacerdotalis N.4 1994, AAS87 -1995-,1114) You have a right under law to self-defense, including a canonical counsel in this matter at all stages. You have a right to present to me, in person at in writing, your defense against this first canonical warning and proposed dismissal within fifteen (15) days of receipt of this warning. Please be advised of the seriousness of this matter.

Posted by Diane Dougherty at 5:48 PM